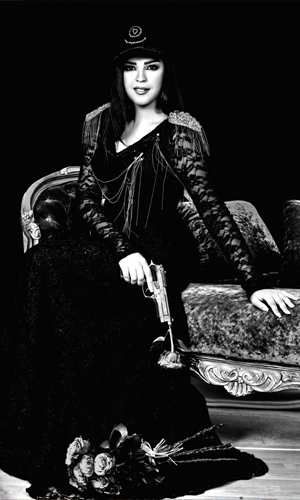 Ruwaida's singing career took off after she won the silver medal in 1996 during the 1990s' flagship music programme "Studio Al Fan".
Her outstanding performance of classical music and emotive vocal impact earned her the title of "Fairuz Al Khaleej" or "Fairuz of the Gulf".
Ruwaida signed a contract with Lebanese director Simon Asmar and Al Khuyool Production Company that same year and launched two singles "Ahebak" and "Maaoul" a duet in Lebanese with Ziad El Burji.
Returning to her hometown, Abu Dhabi, outlined Ruwaida's singing future where she was signed with the Middle East's premiere production company, Rotana Audio & Visual.

In 2002 Ruwaida came to prominence with the release of her first album "Akher Hob".
The album included Ruwaida’s hit song "Hateitak fi Bali", the track that introduced Ruwaida to the lines of GCC female singing sensations.
With this album, Ruwaida took the stage at the Dubai Shopping Festival and initiated her unique performance career.

In 2004, Ruwaida released her second album with the hit song "Ghereeb Al Tebayee". Ruwaida's choice of songs showcased her vocal capabilities through a variety of styles ranging from pop to slow.
With the second album Ruwaida's singing path was beginning to be clear to the critics and audience as the only female pop singer in the GCC.

In 2006, Ruwaida embarked upon a new experience in her career, singing in an Egyptian accent. "Kanet Marhla" received wide acceptance, helping Ruwaida penetrate the Egyptian market and adding to her existing success, which was crowned.

In 2007 with a Pepsi contract. This agreement was a major turning point in Ruwaida's career as she became the GCC's first ambassador for an international brand.
Ruwaida’s multi-dimensional talents were unveiled in her participation in "Sea of Stars", a dazzling movie combining established talents from the Middle East like Wael Kfoury, Haifa Wehbi and Carole Smaha and rising stars in the music industry.

Her skills didn’t stop since then though, Ruwaida’s acting skills were revealed clearly in 2013 at the first Musical Khaleji series “Do Re Mi” as an Arabic teacher whose passion has always been music, Ruwaida was the main character along with a group of youth singers from different Arabian countries.
Ruwaida participated as a guest of honour in many programs including Star academy, "Al Arrabb", Mission Fashion, a judge in “Zayye El Nujoum”, and many other programs.
She also participated as a guest star in the Saudi series “Hawamer Al Sahraa’ 3”.
Her stage performances spanned the Middle East from Beirut to Oman and the UAE.